You can only play an ace once

All families have their traditions. When my brother and I were young, one of my family’s was to play cards, play hand after hand of whist.

In the summer, games of whist were a holiday ritual. Night after a night, a pack would come out, be shuffled, then dealt. I would partner my dad, my brother my mum.

We had our own terminology to describe the action, the Atkins whistspeak, the Atkinsese. Do other whist players talk of  “rounds” and “trumps”? I have no idea.

We even had our own set of clichés to call on to dissect each round. The winners' smiles would give way to groans on hearing the losers suggest some kind of altervictory. "I think we did very well, given our hands."

One set phrase has really stuck with me, become a maxim of reference in more than cards. Often when someone put an ace down, they would draw breath and declare, “You can only play an ace once.”

An onlooker (there never were any!) might have thought it meant you should wait until the right moment. Hold the ace back for when you need it most. And it did. But there was a second meaning – an ace can only win one trick, whether you play it now or later.

In other words, just get on and play it.

Which brings me to this card in my collection. My American friends, take note, now is the time to hold onto your hats. Click on the images below so that you can get a proper look. 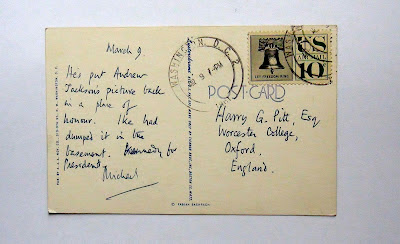 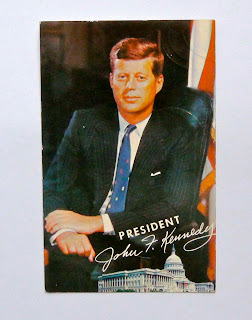 I found it at a market in North London, near Angel tube station. It’s not a great destination for postcard hunting, most of the traders deal in jewellery and antique furniture. But at one stall, alongside stationery from the American Civil War, were boxes of US postcards.

Spotting the postcards, I slipped into my market routine. Grab a section of cards, flip them over and scan for messages. Sift for Eluard’s gold…

It was the surname of the recipient that made me stop on the card.

Pitt - a name of high British politics in the eighteenth and nineteenth centuries, jarring with the twentieth-century form of the postcard.

Then came the destination. Worcester College, Oxford – by coincidence, the place I studied American politics. At this point, I was already sold on paying the dealer the asking price of £3.50.

But then the message:

He's put Andrew Jackson's picture back in a place of honour. Ike had dumped it in the basement. Kennedy for President.

Of course, reading the message in Michael's handwritten scrawl gloriously delayed the punchlines, prevented me from making sense of the card in one go. I think I understood “Ike” as President Ike on only the third or fourth reading.

So there you go. The ace: a message from the Kennedy White House, sent only weeks after JFK came into office. The Best and the Brightest assembled in Washington. Hope made tangible in a card.

And fifty years on, the card, a trace of Camelot, ends up in a Camden market.