I bought a postcard from a museum

H and I spent Saturday in Arundel, a market town in West Sussex.


We'd wanted to have at least one day of the long weekend out of London. And as the forecast looked patchy for the bank holidays, we went for Saturday. Ready for a walk and to see some green, we arrived about 11 o'clock on the train from Victoria.

Both of us grew up a long way from London. Yet I suspect it was easy to pick us out as daytrippers from the capital. If my thick glasses and rolled-up jeans didn't give us away, then Helen clutching "Country Walks Near London - Volume 2" must have.

The series by Time Out is worth buying. Over the years it's been useful for getting to know South East England, that is what lies beyond the M25. And maybe the guides have even made London feel a bit more like home. Easier to place.

But there's no messing about. The books cut straight to the walks; buy this train ticket, visit that village, have a drink of this beer here....

And while their blurb is fair - "country escapes that breathe life into the most jaded Londoner" - there is an awkward sense of pockets of the countryside being parcelled up. Lines being drawn without much context.

Fortunately, as ever, we managed to lose our way.

A couple of wrong turns and we were off the Time Out route. With 3G phones beyond signal, we had to rely on chance conversations with passersby.

Of course, this proved to be the making of the walk.

Free from the book, we could now fully relax and take in what was around us: skylarks, field poppies, willow warblers, twisting hedgerows, and even, at one point, a pair of biplanes that looped over us from a local airshow. 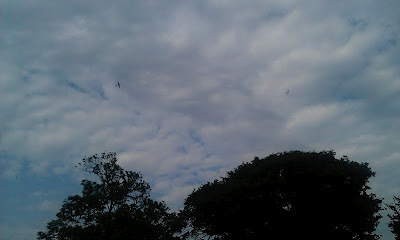 Before setting off, we'd been drawn into Arundel itself. Striding past a newsagents selling Salmon's postcards, we'd intended to look round the town's castle.

Put off by the hill and distracted by the lure of buying something 'authentic', we ended up in Arundel Bridge Antiques Centre.

For half an hour or so, we parted company. Each off in our own reverie.

I absentmindedly climbed some stairs, and found a real treat - Arundel Photographica.

Every innovation from the past 120 years of photography seemed to be represented. And honoured by Chris with handwritten cards.

After a while, rather than feeling hurried by the disembodied paparazzi, you felt ok to explore in your own time. The shop's order provided a sense of calm.

The Butchers and Rochesters had been given ample room to spread their folding bellows. And the works of Exakta and Zeiss rested still - happily empty of both film and, for now at least, purpose.

This was a collection to be enjoyed. The shop was quite busy, but the merchandise didn't seem to be going anywhere soon.

Standing there felt like being in a museum. Sure, there was no entrance fee, no audio tour and no invigilators wearing brightly-coloured shirts. And unlike at a museum, with care you could touch what was on show.

But the cameras on display appeared curated first, and on sale second. They were arranged according to their history rather than their price. And crucially, Chris was there to give you as many facts and opinions as you wanted  - who made them, where they were from and how they have been used over the years.

Perhaps, coming from London, it was the presence of the owner that made me feel I was somewhere other than a store; Mr Argos and Mr Boots are rarely on hand to talk through their wares. And ultimately this is Chris' means of making a living. Stock has to turn over sometime.

Predictably, I steered my chat with Chris to postcards. And drew out from him a tutorial on how one of the Rochesters might have been used to make homemade cards.

I even managed to buy a couple of Edwardian cards from a box on the counter. Unsurprisingly, given the people who visit the shop, there were no photo-cards left.

For our walk, the cards acted as bookmarks in the Time Out guide. Back in some sort of use, after maybe a hundred years of passing between collectors' and dealers' albums.

Useful, until we lost our way. 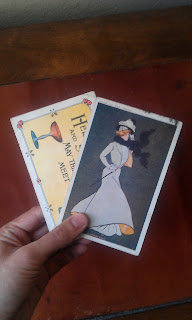