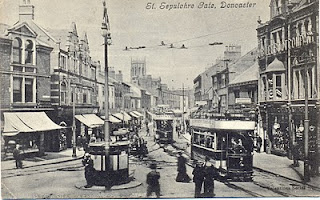 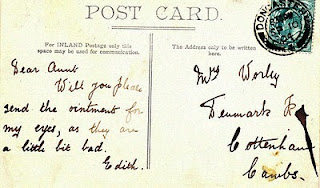 Collecting postcard messages is no easy pursuit. For one thing, your eyes boggle after an hour or so of going through trays at postcard fairs.

To cope, there are a few rules you can follow to make the sifting easier.

For me, Rule #1 is any card worth buying must be stamped and have a postmark. This way at least you know that the card was sent. OK you can't be sure that it was read by the addressee. But it gives weight to the idea that the message was part of a real dialogue.

Not only does this week's card have a stamp and a postmark - it also has some smudged ink, bringing to life even more the physical act of putting pen to card.
Posted by Postcardese at 03:19 3 comments:

Interpreters of fate to the rescue? 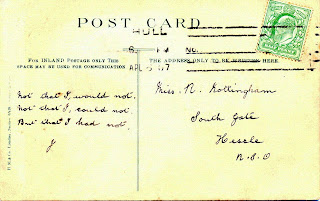 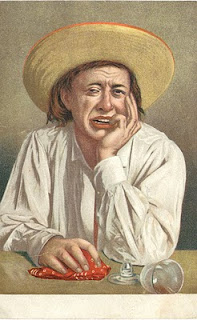 What's been great about starting Postcardese has been coming across people with similar passions. Like Reminiscene's blog or the PostSecret project.
Before then, collecting postcard messages had felt somewhat lonely.
In fact, it had been pretty hard to find any allies. One source of solace though was the German philosopher Walter Benjamin - no really, he was. His essay 'Unpacking My Library' is superb - go with me on this.
The essay neatly draws out the emotions involved in collecting physical objects which have mysterious histories - in his case old books.
For Benjamin, unanswered questions surrounding an object's journey over time create a kind of 'magic encyclopedia', waiting to be explored. This makes the collector, first and foremost, an 'interpreter of fate' - not quite a superhero I know, but it's as close as we're going to get. Anyway here's a link to the essay in full.
Enjoy interpreting this week's card! Looking forward to reading your comments.
Posted by Postcardese at 03:34 No comments:

Email ThisBlogThis!Share to TwitterShare to FacebookShare to Pinterest
Labels: 1907, anonymous 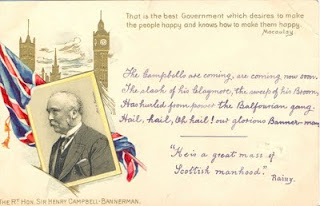 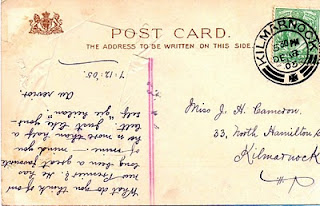 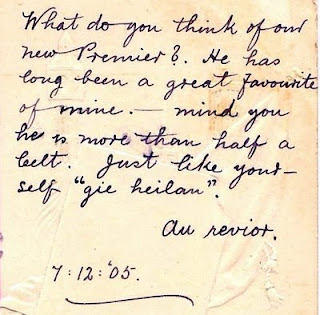 Much has been made of this year's election in the UK being driven by new media - YouTube, Twitter, Facebook...
But it's not the first to have been influenced by new forms of communication. In fact, parties at every election in modern times have grappled with new ways of getting their messages across - whether it was the first political broadcasts on TV in the 1950s or the rise of rolling news in the 90s.
In the year leading up to the February 1906 election in which Campbell Bannerman's Liberal Party won big, postcards were a key battleground.
An astounding 677 million postcards were sent in 1905. And politicians were keen to get in on this. Today's card shows an example of how.
Campbell-Bannerman had just taken over as PM from the "Balfourian gang" and was set to call an election, much to the delight of our anonymous author ("Hail, hail, Oh hail! Our glorious Banner-man.)
What hit me first about this card was that someone had taken the time to write a poem for a friend on the qualities of a political leader. I simply can't imagine anyone today writing a ditty about Glorious Gordon, Super Cam or the Mighty Clegg.
But there's also the quality of the communication.
New social media - for all their wonder - put a great emphasis on one-to-many communication. And with that, the impact of each message falls. Status updates, tweets and round robin emails are easy to ignore.
A one-to-one message like this though had to be taken seriously. Of course, it would be a while before Miss J H Cameron's opinion counted at the ballot box. But that's another story...
Posted by Postcardese at 03:21 No comments:

On the way home, Dad 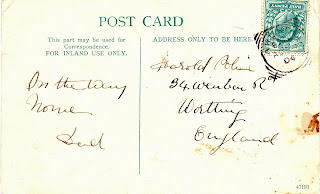 Some great postcard theatre for you this week from E.M. Forster's Where Angels Fear to Tread:

Irma collected picture post-cards, and Mrs. Herriton or
Harriet always glanced first at all that came, lest the
child should get hold of something vulgar. On this occasion
the subject seemed perfectly inoffensive--a lot of ruined
factory chimneys--and Harriet was about to hand it to her
niece when her eye was caught by the words on the margin. She gave a shriek and flung the card into the grate. Of course no fire was alight in July, and Irma only had to run and pick it out again.

"How dare you!" screamed her aunt. "You wicked girl!
Give it here!"

Unfortunately Mrs. Herriton was out of the room. Irma,
who was not in awe of Harriet, danced round the table,
reading as she did so, "View of the superb city of
Monteriano--from your lital brother."

Mrs. Herriton swept into the room, saying, "Come with
me, dear, and I will tell you. Now it is time for you to know."

If you know of any other uses of postcards in novels, plays or films, send them into postcardese@gmail.com.

Posted by Postcardese at 03:15 No comments: