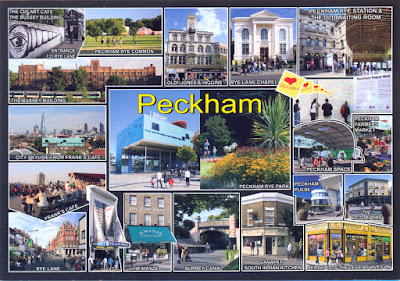 It is with regret I bring up the general election. For those still in need of counselling, help can be found here.

For anyone lucky enough not to be around the UK this year, the 'dead cat' was a new low in electioneering. When someone is losing an argument, becoming uncomfortable at their opponent's momentum, they now throw into the public debate an event known as a 'dead cat'. The dead cat may be horrible to look at, grotesque even. It may incite anger, or disgust. But that doesn't matter. For the person hurling it into view, it is simply better people talk about the cat than whatever they were discussing previously.*

This week, I came across an alternative to the dead cat...

A couple of years ago an elderly relative gave us use of his car, an old-but-immaculate Ford Focus. It has sat on our road in Peckham ever since - and for most of this time, it has sat idle. In fact, it has been parked up for so long, it's become less a people-carrying vehicle and more a site for community expression: the liberal parking manoeuvres of neighbours have decorated it with all manner of dents and scratches; the bumper resembles a Dulux colour chart.

Anyway, this week, standing by the stationary car, I watched as a small child crashed his BMX into one of the wheel arches.

He got up off the road straight away, thankfully, and assured me he was fine. (I stress I was primarily concerned with his well-being.) But then, clocking the car had something to do with me, he twigged he might be in trouble. Having picked up his bike, he went over to wish away any dent in the car's side. Unaware there was no way I would be able to identify a new dent, he released his lively unicorn...

Jump right over the cars?!! He had me. Any possible annoyance at what had happened had no chance of materialising. He began recounting his street-cycling adventures. Riding his 3-foot high bike, he explained, sometimes standing on the hub of its back wheel, he was able to hop over any car he chose. He pointed at the road's cars as if they had been assembled just for this purpose. It was what he did to pass the time.

I challenge anyone to be angry at a boy claiming to be their town's E.T..

Above (and below) is a postcard of Peckham produced by David Hankin. It shows the different sights around this corner of London. Two things worth noting. First, the sky isn't always blue in SE15. And second, if you squint hard enough at the picture of Peckham's Rye Lane, you can just about make out a young superhero bouncing over car after car after car. 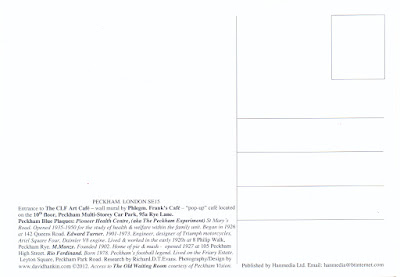 * In the case of the Conservative Party, the cat took the form a relatively minor politician (Michael Fallon). As the Opposition seemed to be making headway on the issue of clamping down on tax evasion, he made some pretty low accusations about the leader of the Labour party - that he was someone willing to stab his own brother in the back, and was therefore not to be trusted. Sure enough, the media focused on the dead cat. Tax evasion was left for another year.
Posted by Postcardese at 08:27 5 comments: