Before the 'back' was divided 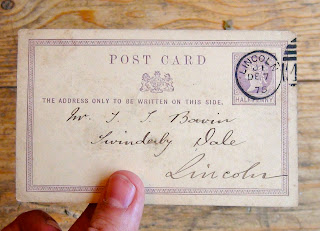 A few people have asked since seeing the programme what postcards looked like before the back was 'divided'.

You'll remember the modern card only arrived in 1902 after a German publisher (one F. Hartman) persuaded the Post Office to let him put a picture on the 'front' and then split the other side between message and address.

Well, here's an official card sent in 1875. That's 5 years after the postcard was introduced in the UK. It's much smaller than later cards and is printed in mauve. Only the address could be written on the side shown above, with the message restricted to the other.

You'll also see the stamp comes with the card. No need to buy one.

These cards were all made by De La Rue, the money printers. And incredibly, they were the only cards that could take advantage of the half penny rate for postcards.

De La Rue's monopoly was finally relaxed in 1894 after a campaign by the MP Henniker Heaton. After this, privately-published cards could be sent at the postcard rate. Go Henniker!

When something becomes so familiar, like the form of the postcard, it's easy to forget the people behind it. Yet how the card looks today was not inevitable. It needed people to change things. And in a curious way, the anonymity of Hartman and Heaton today is testament  to the totality of their triumphs.