As well as writing a column on postcards, I've filmed a few videos for the magazine's website. This is the first one which will accompany the March edition.


Speaking into the camera reminded me of George Orwell's essay Poetry and the Microphone.


"In broadcasting your audience is conjectural, but it is an audience of ONE.

Millions may be listening, but each is listening alone, or as a member of a small group, and each has (or ought to have) the feeling that you are speaking to him individually.

More than this, it is reasonable to assume that your audience is sympathetic, or at least interested, for anyone who is bored can promptly switch you off by turning a knob...."

While it would be a stretch to think "millions may be listening", I hope you're as sympathetic as I was imagining. And can ignore the umms and errs.

Longstanding readers of Postcardese will remember Muriel's card from "A fine set of girls" back in September 2010.

For those of you without a postcardaphic memory, here are the two sides of the card.

I think Muriel's second from the right on the front row. Not sure why - there just seems something furtive about her.

Furtive... what a great word. 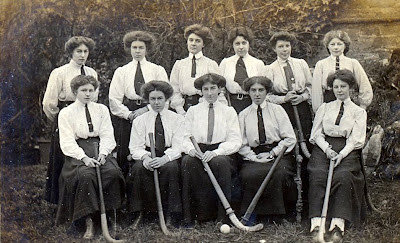 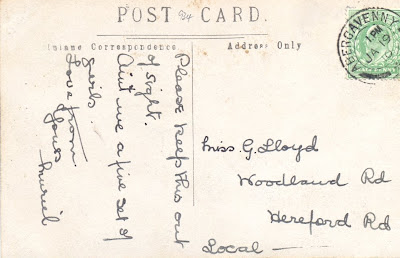 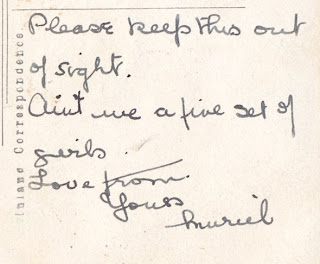